Marching for Science and much more

After just two weeks of rest, Fred got back to work last week when young lion Jon Batiste of The Late Show with Stephen Colbert invited him to be a part of the party at the Earth Day 2017 March for Science in Washington, DC. Click here and go to time point 2:10:32 to see Fred's two featured songs, along with the masterful introduction by Questlove. Many thanks to all who helped make it happen.

Fred the funk soldier left the march early to ride to Asbury Park, New Jersey, where he contributed a solo to the tune "Down and Out in New York City" at a homecoming concert by Steven Van Zandt and his new band the Disciples of Soul. Fred produced the tune in 1973 for James Brown and the soundtrack of the film Black Caesar. Van Zandt included a cover of it on his forthcoming CD "Soulfire." Bruce Springsteen also made a guest appearance on the show. Many thanks to to the whole Van Zandt crew, especially bandleader Marc Ribler.

Fred won't go home again until May 21, after upcoming touring that includes two weeks in Europe with his band The New JBs, a short run with the country funky Amrod Band in Germany and Switzerland, and a Funk Workshop in Paris organized by the association K'Dense.

On Wednesday, he'll play Tulsa, Oklahoma, as part of The Ernie Fields All Stars in the show "Black Town Blues and North Tulsa Jazz" at Cain's Ballroom, presented by the Oklahoma Historical Society. 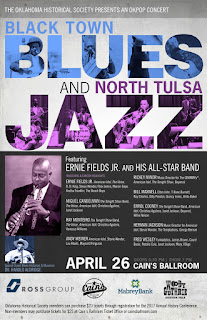 Before his break that ended last week, Fred finished up another four-weeks on the road with a visit to Kosice, Slovakia, where he was the guest of the young band Jungle Label, who we thank for showing him a funky good time as they released their new CD "Who's Gonna Pay for That?" Click here for a video celebrating the visit.

Before that he capped a three-week tour with his Generations Trio (with Leonardo Corradi on organ and Tony Match on drums) with a stand at the Jazz a Carthage Festival in Tunisia.


Before Tunisia, the Generations Trio made a third return to the Hideaway in South London. A special thank you to promoter Graeme Miall for these photos from a fun two nights. Fred's compadre Pee Wee Ellis sat in on the second night.

Before London, Fred traveled to Perpignan in the south of France to take part in the monthly "Yes We Jam" event sponsored for students by El Mediator. There he met some talented musicians including this young trumpeter and his old friend and vocalist Vinx.


The European part of the tour included many stops in Spain, including Malaga, where he reunited with the trombonists of the local band that shared the bill.