Fred set a prayerful tone for 2017 with his first gig of the year -- the annual Hymns & Spirituals concert by the Mark Sterbank Group. This year's show -- the 17th annual -- was held at East Cooper Baptist Church on Jan. 22 and featured Fred with Mark on saxophone, Charlton Singleton on trumpet, Herman Burney on bass, Quentin Baxter on drums and Demetrius Doctor on keys.

Next on the horizon is his appearance at Miami's North Beach Band Shell this coming Saturday night, with his band the New JBs including longtime friend Doug Carn substituting on keyboards. Roosevelt Collier and student musicians from Guitars Over Guns also will perform. Click here for tickets. 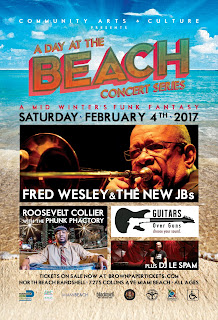 The following week he'll take a trip to Denver, Colorado, where he'll be a guest with the James Brown Dance Party for a double-venue funk night Feb. 11 at Cervantes' Masterpiece Ballroom. Click here for tickets.

Finally, funk musicians and would-be funk musicians in or near Paris should register now for Fred's Funk Workshop on May 19-20, 2017. See details and video in the flyer below.