Angels and friends worked together to protect, strengthen and delight Fred as he finished his marathon seven weeks on the road with a Cologne, Germany, recording session for the forthcoming Christmas album by his friend and mentor Pee Wee Ellis, followed by a fast-paced 14-city European tour with his band, the New JBs. Many, many thanks to all involved.

Starting on April 18 with a return visit to Le Jam in sunny Montpellier, France, the New JBs tour wound through Castres, Seignosse, Paris, Massy, Guyancourt, Dunkerque, Belfort and Saareguemines, France, before moving through Copenhagen, Stockholm and Gothenberg, Sweden, then finishing up with dates in Zurich, Switzerland and Schweinfurt, Germany. Phew!

Among the highest of many highlights were a sold-out Monday night at the New Morning on a lovely April day in Paris; a gig-plus-birthday-party for saxophonist Phillip Whack at the beautiful beachfront Salle des Bourdaines on France's south Atlantic coast; the chance to reunite with Juan Rozoff, his B-Fam and the Horn Dogz, who opened the show in the Parisian suburb of Guyancourt; and a second encounter with Pee Wee when he and Fred both were special guests with the Lorraine Jazz Big Band at a Rotary International event in Saarguemines.

Also warranting special mention were the packed houses that greeted the band in Scandinavia, marking Fred's and the band's first time there in some 20 years. Workshops with students in Montpellier and Castres also added to the fun.

Among the angels and friends who made it such an amazing tour were many photographers who shared the best of the photos below. Special thanks to Heinrich Buttler, Danielle Schoenfeld and Gilles Calao.

Sofia White interviewed the band and wrote this article and took these photos. Thanks, Sofia! 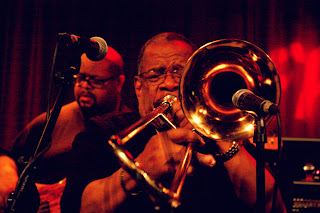 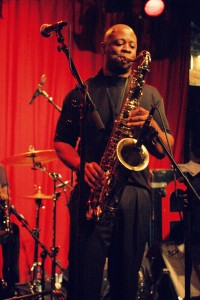 Axel Olsson, an award-winning entertainer himself and part of the Ultimate Bboys crew, served as the band's host at the Nefertiti Jazzclub and led the team that went above and beyond to make it a great night. 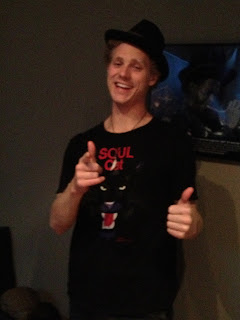 The last night of the tour featured another birthday celebration -- an early one marking the 50th of bassist Dwayne Dolphin, the youngest official member of the band, who's been part of it for more than half his life. Thanks to promoter Mark Klein for making the birthday party, and the great concert, happen.