From Paris to the Strathmore to Cali

Fred has had so much fun since mid-April that his blog hasn't been able to keep up. Here are some photos with from his last European tour with the New JBs; two quick hits with Abraham Inc. in NYC and at the Strathmore music hall in North Bethesda, Maryland; and his fun and educational visit to Miracosta College in Oceanside, California.

Paris
It was just another (sold-out) night at the New Morning until a surprise guest showed up to sit in on drums. Here are some photos, and a bit of youtube video, of rock star Lenny Kravitz, Fred's longtime friend, holding it down on "Gimme Some Mo." 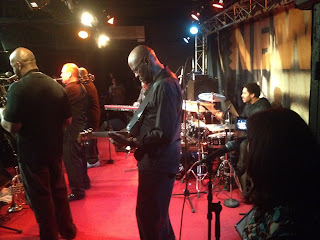 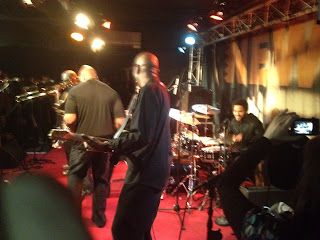 Click here for the video, courtesy of youtuber DJATN77. Thanks!


Also while in Paris, Fred went into the studio with Moroccan artist Ahmed Soultan. Fred contributed there to a track Ahmed is creating to honor the late African master Fela Kuti. Stay tuned for more information about the album and the track's release.

After finishing up in Europe with dates in Duisburg, Germany, and Dornbirn, Austria, Fred headed to New York City for some time with Abraham Incorporated that included rehearsals, a show at 92Y Tribeca, and a live performance on WNYC, which you can hear by clicking here.

An Amtrak train took Abe Inc. and crew to the Washington, D.C., area for a performance at the Strathmore to open the annual Washington Jewish Music Festival. One highlight for Fred and the band was that they got a delicious backstage special delivery from KBQ, the Bowie, Maryland, barbecue restaurant operated by his daughters and son-in-law. He also got to pose in the dressing room for this shot with all three of his girls.

Before he could make it home, Fred had one more stop -- this time in Oceanside, California, for the Oceanside Jazz Festival, where he was the instrumental special guest at a concert featuring MOJO -- the Miracosta-Oceanside Jazz Orchestra, under the direction of saxophonist Steve Torok.

Trombonist and UCLA ethnomusicolgy PhD candidate Alex Rodriguez was in attendance, and wrote this review.  Thanks, Alex!

Here are some more photos from the day in Oceanside, which included a Q&A session with the college and high school jazz students who participated in the event. Many thanks to the whole Miracosta-Oceanside family for being such gracious hosts -- especially Steve, student festival coordinator Amanda Herrera and trombone section member-turned-driver John Durkee.