March is shaping up to be busy, too, but February was an especially exciting month for Fred, with stops in New Orleans; the Florida Keys; Washington, DC; and St. Petersburg, Russia! First the story; scroll down for pictures below.

1. In New Orleans, it was Mardi Gras time and Fred sat in with the Maple Leaf's weekly Thursday Trio, featuring drummer Johnny V and former Meters bassist George Porter Jr.; with Chris Jones' band celebrating the Mardi Gras Indians, 101 Runners, at Tipitina's; then with Walter "Wolfman" Washington at the Krewe du Vieux's outlandish annual Mardi Gras Ball. On Sunday afternoon, he was back at Tip's for the kids' workshop organized by Johnny's wife, Deborah.

2. In Key West, he did some strategizing with Carolyn Gillman, visionary of No Matter What, who's determined to create a concept connecting living legends such as Fred to young children who can use the experience to learn about everything from music to history to multimedia communications. While there, fellow trombonist Harry Schroeder arranged for him to sit in at the weekly jam session at the historic Green Parrot Bar. Other highlights included Sunday brunch at Blue Heaven and a delicious dinner at Mangrove Mama's. Thanks, Carolyn!

3. Then, for the highlight of the month, Fred and New JBs horn players Ernie Fields Jr. on sax and Freddie Hendrix on trumpet were part of the House Band led by Booker T. Jones for "Red White and Blues," part of the "In Performance at the White House" series. He met President Obama and the First Lady, and backed up guest artists including the legendary B.B. King, Mick Jagger, Trombone Shorty, Shemekia Copepland and Susan Tedeschi. Pictures with the President and First Lady are still to come. The broadcast premiered on PBS stations Monday and is available online here.

4. With barely a day of rest, the next stop was St. Petersburg, Russia, where he was a special guest with the Pee Wee Ellis Assembly at the Usadba Jazz Zima Festival.

Thank you, Erika Goldring, for these shots. 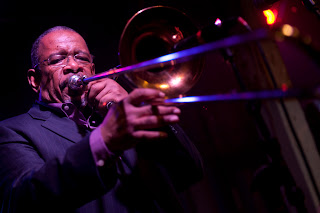 Thank you Jeffrey Dupuis, photographer and internet talk show host, for this: 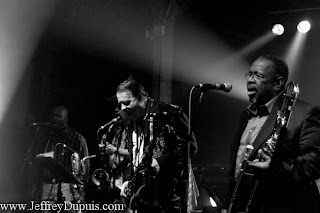 From the family cameras of cousin Song, Joya and Fred:

From the White House: