Lola! and more at the Long Beach Funk Fest

Fred and the New JBs headlined the third installment of the Long Beach Funk Fest -- a free, environmental-friendly event that's gained the love and respect of California funk fans by fulfilling its stated purpose: Sustaining our Future Through Funk. Also featured were other artists including former Slave lead singer, Steve Arrington. 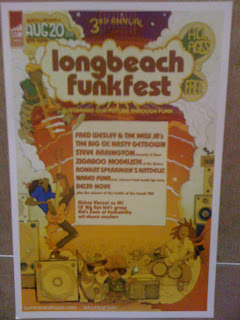 Among the highlights of the beautiful Saturday, Aug. 20, was getting to see Lola Love, Fred's longtime family friend and former colleague from when both were part of the James Brown Revue in the early 1970s -- Fred as music director and Lola as a dancer and singer. She now is a Southern California-based certified life coach, and always a joy to see.
Fest founder Bobby Easton and his team, including volunteers Zelda, Desiree, Jen, and coordinator/host extraordinaire MsT, made it fun for Fred and the whole band, and MsT added to the day a delicious breakfast at the local Roscoe's Chicken and Waffles. The band was greeted at Roscoe's with a funky performance by the Sea Funk Brass Band. Fred also got to gather with fans and to visit with the host of the Fest, funk scholar extraordinaire Rickey Vincent, author of "Funk: The Music, The People and The Rhythm of the One," and author of the foreword to Fred's book, "Hit Me Fred: Recollections of a Side Man."