Fred is excited as his new friend D'Angelo's forthcoming album moves closer to release. MTV Hive reports details in this exclusive interview with the album's producer, Russel Elvado. Fred's participation is just one of the newsworthy features of long-awaited project from the sexy soul superstar. D'Angelo, who has been getting rave reviews for some early 2012 concerts, says he hopes for more collaboration with Fred in the future.

Here's a photo from the October 2011 recording session where Fred laid a solo on one of the tracks. Stay tuned! 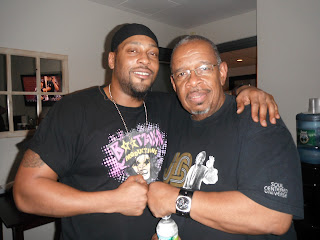