On "Unsung," on TV One tonight!

Fred was interviewed in Nashville last fall for a special tribute to James Brown airing tonight on the TV-One program "Unsung." It's not a usual edition of "Unsung," since JB clearly wasn't, but it's the first of a planned series of special tributes. The episode premieres tonight at 8pm Eastern. Check local listings and click here for more details.
- February 22, 2017 1 comment:

Fred and family are among those mourning the passing of legendary James Brown drummer Clyde Subblefield, and sending love to his family and management.

"He was the funkiest drummer in the world and he was one of my best friends," Fred said.  "I loved him a lot and I will miss him a lot."

The two last played together in November at the San Francisco Funk Festival as guests of the James Brown Dance Party. This photo is from 2012, when Clyde was a guest with Fred's New JBs at the same festival.

A young trombonist in Fred's hometown has a new horn and a new mentor thanks to his band director's public appeal and Fred's generous response. Ashley Ringold made this Facebook post (thoughtfully blacking out Fred's number) about her son Ashton's good fortune.

Gertie Wesley, Fred's first wife, saw this news report on Mobile, Alabama's Channel 15 about Scarborough Middle School's dire need for instruments. She sent Fred a text, called up the band director, and the rest is history. The trombone Fred gave Ashton was one he demonstrated for Chinese maker Jinbao. Click here to see the demonstration.

In other news, last weekend's gig in Denver with the James Brown Dance Party was a blast that also gave Fred a chance to connect with friends from the Foundation of Funk project and Lettuce.

Many thanks to Jose Elias and team at Community Arts and Culture for being such wonderful hosts of the event Saturday at the North Beach Band Shell. Also thanks to Chad Bernstein and team at Guitars Over Guns for hosting Fred at one of its middle school sites. Click here for coverage of the show at liveforlivemusic.com, including video.


Up next, join Fred in Denver when he guests again with the James Brown Dance Party at Cervantes' Masterpiece Ballroom. Click here for tickets.

Then, on March 9, join Fred outside Washington, DC, as the U.S. Army Band "Pershing's Own" pays tribute to him and his music at the annual American Trombone Workshop at Fort Myer, Virginia. Click here for more information. 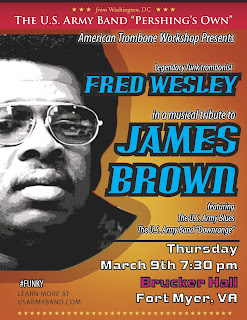