Ringing in the New Year with the Greyboy Allstars!

The last two nights of 2011 will see Fred reuniting with his old friend Karl Denson and the Greyboy Allstars in California for shows commemorating the classic "West Coast Boogaloo" album at the Belly Up in Solana Beach and the Independent in San Francisco.

The latest in  Michele Meyers' series of radio documentaries for Seattle station KEXP, 90.3 FM, is "James Brown Creates Funk," and it features Fred and Rickey Vincent, who wrote the definitive book Funk, the Music the People and the Rhythm of the One, as well as the foreword to Fred's book. Click here to listen to the documentary archived online.

Speaking of Fred's book, the Funky Fred Wesley Store is sold out of hardback copies, which are going for more than $80 USD on Amazon.com, but there's still time to get an autographed softcover in time for holiday giving. Also available is the CD compilation, "The Best of Fred Wesley, Vol 2." Visit www.funkyfredwesley.com.
- December 19, 2011 No comments:

In addition to "The Lost Album," Fred also is excited about the Japanese release of the "Let Love Shine" album by his "new" cousin Song Byrd. Song, who Fred met for the first time in 2008 at the Detroit funeral of his beloved "Aunt T.T.," Sarah Stevens Edwards, who was Song's grandmother by marriage.  It turned out she is an excellent neo soul singer who has become close family, and with whom he looks forward to playing at least one gig in 2012. 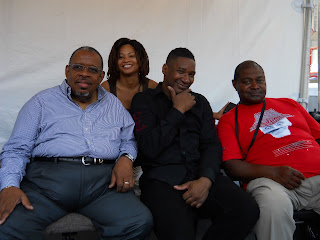 Comparing her to Dionne Warwick, Chaka Khan and the late Phyllis Hyman, Japan's Sweet Soul Records released the album under an exclusive license agreement with French Nu-Jazz producers Alexandre Tassel and Guillaume Naturel (Tassel & Naturel). "Let Love Shine" features guest artists including Marcus Miller, Manu Katché, E-Z Trigga, Acquenin, DJ Cam, and the late Guru, the other half of the hip-hop duo Gang Starr.
Fred will appear as a guest with Song and Tassel & Naturel on March 2, 2012 at La Fabrique in Nantes, France. He also hopes to have her appear with the New JBs on some gigs during the summer.
After the release of her first album, "In The Fireplace" in 1999, Song moved to France where she participated in the recordings of several albums. She has been featured on albums such as "Street Soul," "Just A Feeling," "Deux Pieds Sur Terre," and "Fillet of Soul Opus 2." She has been on stage with the likes of Keziah Jones, Les Nubians, Manu Katché, and Lisa Stansfield, and has opened for Lil Brother, Bobby Lyle, Peabo Bryson and the late great Isaac Hayes.

Just in time for the holidays, "The Lost Album (Feat. 'Watermelon Man')" has been found and is available now on Amazon.com, which touts it with this editorial review:

"In the early 1970s, as James Brown gained new ground with a hungry group of young musicians he called "The J.B.'s," the Godfather of Soul knew one man could best lead the band: Fred Wesley, the trombonist who was a master at funk arranging. Under Brown's direction, Wesley would become famous for his solos, and leadership, on the classic hits "Soul Power," "Gimme Some More" and "Pass The Peas." Brown thanked Fred, who was a jazzman at heart, by offering him a jazz album under his own name: The JB's and Fred Wesley. Recording ensued; a single was issued, "Watermelon Man," but the LP release was cancelled. Now, from Hip-oSelect.com, is the complete album as Fred Wesley intended, with six of its nine tracks issued for the first time anywhere, plus four bonus tracks from the sessions that were only previously issued as 45-rpm singles. Except for "Watermelon Man," which used the J.B.'s - with Brown himself on drums - The JB's and Fred Wesley features the cream of New York studio musicians: Randy and Michael Brecker, Joe Farrell, Eddie Daniels, Steve Gadd, Ron Carter and many others. The album is rich with then-current hits, from Brown's own "Get On The Good Foot" to Bill Withers' "Use Me," the standard "Secret Love," which Wesley had been playing for years, and originals by Fred and his arranger Dave Matthews, all in a tightly arranged jazz-funk setting. With the conclusion of the James Brown Singles Series, it would seem the JB vault is dry. Not so: The JB's and Fred Wesley/ The Lost Album featuring Watermelon Man is but one release of more from the archives."

In the mix at MoMA

Fred's friend Vincent Provini, who interviewed him in Paris for France's FIP radio station to promote the release of "With A Little Help From My Friends," will spin some of Fred's music at New York City's Museum of Modern Art (MoMA) on January 5, 2012.

Provini and fellow DJ Luc Frelon together are "L'Improbable Mix," "DJs who play around the world, keeping in mind the eclecticism of FIP while tailoring their live sets to the environment, from festivals and dance parties to museums and performance spaces."

Jan. 5 will find them as the featured guests for MoMA Nights, a fun series that features DJs, drinks and dinner.

Click here to listen to his interview, and here to see a photo from the visit to the station.
- December 07, 2011 1 comment: