Thanks to Marco Venneri, shown here with Fred and his friend Mariano, for the kind words that follow. 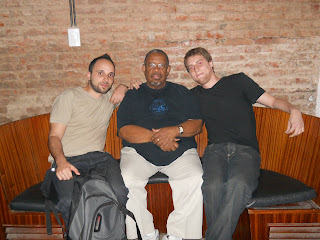 My name is Marco and I was one of the lucky winners of the "Meet & Greet Fred Wesley" contest in Buenos Aires. I just wanted to thank Fred and The New JB's for coming to our beautiful country to share your amazing funky music. I've never thought Fred was going to come to Argentina. If you allow me, I'm going to share a few words with you about the show and the experience.

I would first like to tell you what I felt during the show. I felt like I couldn't believe I was listening to Fred and the band playing live. It was such an amazing show! Both of them (I came to both of them). I liked the second one better because I felt that people were more enthusiastic and warmer. I even saw Fred look at Bruce and smile at some point during the second show. From that moment, Bruce was smiling the whole show as if he couldn't believe how people was enjoying, screaming and dancing. The band was awesome in both of the shows. Today is sunday and I can still listen to the groove in my head! I woke up on Friday and I was dancing while listening to the music inside me. Let me say that the last show was a Wednesday, and it's kind of weird for me to be thinking and listening to the music to this day. Only Fred Wesley and the New JB's could do something like that. Thank you again for that!

Now I would like to share with you what I've felt when meeting Fred. I can't believe I met a legend in person! One of the best trombone players in the world. I even talked to him! I shook his hand! I don't know if Fred remembers because this was before the first show, and he had met a lot of people in these few days, but I'm the guy that came with a friend of mine who plays the trombone. I told Fred that Mariano had also been my first saxophone teacher. He is the one who introduced me to Maceo Parker's music while I was learning music with him, and I introduced him to Fred's music (and now Mariano is learning how to play the trombone). I had the chance to take him with me to come meet you, Fred. I want to thank you for being so kind with us. You were really cool. From the few minutes I've spent with you talking, I was able to tell how humble you are. I later confirmed this when the show was over and you were signing autographs and albums for the whole crowd that was in La Trastienda. You even told Mariano to come back on Wednesday with his horn. That's what I call a musician! An artist! A great person!
Mariano couldn't come. I came on Wednesday and I wanted to bring my sax to show it to you. But I had a complicated day and I couldn't do it (besides I didn't know if they were going to let me in to me meet you again). But at least I was able to make into the show (the best show of my life yet).

I'm sending you the pictures I took when I met you (Mariano is on the left and I'm on the right). What can I say? It was the best moment of my life. It's amazing how a few minutes with someone you've admire for ever can make your life have a spark that wasn't there before (Hope it never goes away). Thank you Fred!!!!!!!!!"
- April 21, 2011